Dudley Massey Pigott Carleton, 2nd Baron Dorchester, joined the Lodge in 1910, and was a “dashing cavalry officer” with the 9th Lancers.

After Sandhurst he was commissioned into the 9th Lancers and served in South Africa between 1899 and 1900, the North Nigeria Campaign between 1902 and 1903, the Kano-Sokato Expedition and throughout the Great War, especially in Salonica and the Balkans, for which he was made an OBE. He was also awarded the Order of the White Eagle 4th Class, by the King of Serbia; the Greek Medal for Military Merit 3rd Class; and the Croix de Guerre by the French President.

Lord Dorchester was a member of the Cavalry Club, the Royal Yacht Squadron, and was Master of the Garth, whose Treasurer was for many years Dorchester’s fellow Lodge member John Simmonds. It was under Dorchester’s Mastership that the Garth met at College in 1925, which is believed to have been a first. He put his passions to paper publishing his thoughts on a sporting life “Sport: Foxhunting and Shooting” in 1935.

Dorchester was another of the Lodge’s brethren to have been initiated into Wellesley Lodge No 1899 in Crowthorne. 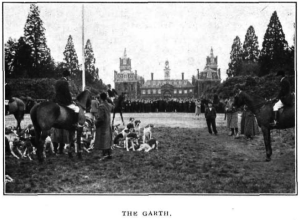