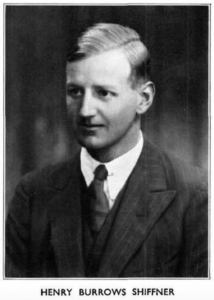 The Shiffners are a distinguished family. Their renown stretches back to the day a distant forebear rescued Charles II by boat after the Battle of Worcester in 1651.

Sir Henry Burrows Schiffner Bt OBE was born in Lewes in 1902 and joined his brother Sir John, the 6th Baronet, at the Benson in 1916, and would go on to be Head of House. It was his brother’s last year and he would go to Sandhurst in 1917, and on to join the Royal Sussex. Sir Henry acceded to baronetcy on his brother’s death in action with his regiment on 24 September 1918.

Sir Henry was commissioned into the Royal Artillery, and played in the RMA XV alongside fellow lodge member Henry Inglis’s son, George, who was also bound for the gunners. He served as ADC to the Governor of Uganda, Sir William Gowers from 1926-29, and married Elizabeth Gowers, the Governor’s niece and daughter of Sir Ernest Gowers in 1929.

He was hit and mortally wounded on 22 November 1941 whilst on forward reconnaissance soon after taking over the 203 Field Battery of 51st (The Westmorland and Cumberland Yeomanry) Regt RA in the desert at Sidi Rezegh, in what is now Libya.[1]

He was 39. He is remembered on the Alamein Memorial in Egypt, and in the family church.