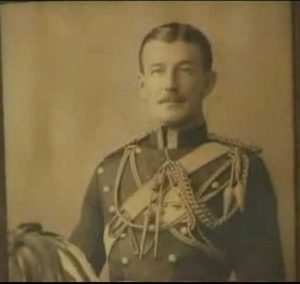 Cavendish went to Wellington in 1891 along with fellow Lodge members Duncan Warrand and William Shakespear. Cavendish was in the Wellesley and was made a Prefect before going to Sandhurst. He was commissioned into the 9th Lancers, where he served under fellow lodge member Lord Dorchester.

As a young Lieutentant he went to the South African War as was at the relief of Kimberley with Col Sankey. He then served asADC to the Lt General India, the first of a series of staff officer roles in which he excelled that took him through the Great War, receiving Haig’s praise for his role as Haig’s representative at French General Headquarters, before commanding 1st Cavalry Brigade between 1924 and 1928.

He was awarded both the Queen’s and King’s medals for service in South Africa, and for the Great War he was made CMG and received the DSO and oak leaves for his four Mentions. From our Allies the  Order of Leopold with four clasps, the Order of the Crown, 3rd Class and Croix de Guerre from Belgium together with the Legion of Honor, 4th Class and Croix de Guerre avec Palme  from France.

He was initiated into Ligonier Lodge No 2436, a  lodge that met in Muttra on the NW Frontier that transferred to the Indian constitution in 1961.

A friend wrote on hearing of his death wrote of Cavendish “his outstanding quality was a robust and active joie-de-vivie, which no mischance could quell. With a nature as generous as his he could not help radiating this, with the result that a meeting with ” Caviare ” always left one with the sense of a touch of colour added to the gaiety of life.”