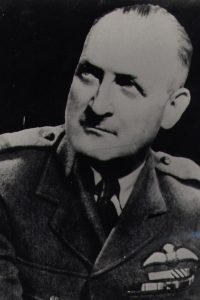 Air Commadore North Carter DFC CB was an RAF officer and keen rugby player. He was in the Hill from 1916, and was made Head of House.

He played scrum half for the XV for two years, captaining the XV in 1920. The 1919 Yearbook described him as “A hard working player, getting the ball away well and able to score on his own. Defence good on the whole, but at times uncertain”. That uncertainty clearly went away with experience, as the 1920 Yearbook concluded that he had become “A hard working scrum-half, excellent in defence and strong attacking player. Led the team excellently”.

He went on to a rather fine start to his career with the RAF at Cranwell, where he captained the XV, played for the XI and won the Sword of Honour. His rugby would continue throughout his career at he played for the RAF XV as well.

His career was suitably varied. He flew Bristol F2Bs for No 5 Sqn in 1923, before becoming an engineering officer at RAF Donibristle six years later. He moved to Iraq a year later, before attending Central Flying School in 1932 before being promoted to Flight Commander with No 56 Sqn flying Bulldogs. 1934 saw him flying Wapitis as a Flight Commander with No 60 Sqn in Waziristan in operations connected to the Mohmand operations on the North West Frontier and earning him the DFC.

After RAF Staff College he joined Bomber Command again on the engineering side,  before becoming a Staff Officer with Deputy Directorate of War Organisation in 1938. The Second World War saw Carter as OC RAF Dalcross from 1941 (now better known as Inverness Airport), followed by RAF South Cerney (which wash me to several training and conversion units) and RAF Pocklington, a Wellington and Halifax Bomber Command base. In April 1944 he became Deputy Director of Bomber Operations before taking over as OC RAF Castel Benito, near Tripoli in Libya.

He became Director of Organisation (Forecasting and Planning) in 1946 and AOC and Commandant at RAF Halton and the No 1 School of Technical Training. 1951 he was made Senior Air Staff Officer (SASO) of  No 205 Group, a Heavy Bomber Group in the Eastern Mediterranean. He last job was as Director of Personal Services (Provost Marshal)/Provost Marshal and Chief of RAF Police. Following Retirement from the RAF he became Temporary Administration Officer for the Northern Region of Nigeria, being ‘our man in Kano’, before eventually retiring to Australia in 1963.

He was a member of the Constitutional Club.