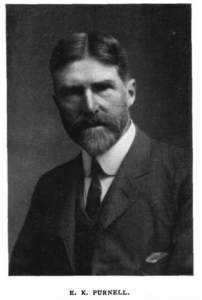 ‘Prang’ Purnell was a scholar, school master, and historian. He was named after his maternal grandfather Capt Edward Kelly who led the decisive charge of the Life Guards on the evening of June 17, 1815.

He went to Wellington in 1861 where he earned his nickname but sadly the reasons for the moniker do not survive. He spent time in both the Lynedoch and the Combermere, and was made a College Prefect. He gained a scholarship to Magdalene College, Cambridge He spent four years in India as a tutor to the sons of Sir Salar Jung before returning to Wellington as an Assistant Master and the a Housemaster from 1884 first of the Wellesley and then what would on his retirement become the Picton. He also taught at a minor public school in Slough during the Great War and also served in the Ministry of Shipping. The value of his work there was recognized by the gift of the M.B.E., which was bestowed upon him in 1919.

In retirement he finished a noted history of Magdalene in 1904 that is still available today, as well as working on several noted manuscript collections and was elected a fellow of the Royal Historical Society.

Purnell was initiated in to Wellesley Lodge No 1899 in Crowthorne, a lodge shared six other members with this Lodge: Philip Napier-Jones, Frederick Lawrence, Freeling Lawrence, Lord Dorchester, Joseph Bevir, and Vernon Bryant.

He was a strong supporter of Berkshire masonry, helping found Heather Lodge No 3131, and joining Berkshire Masters Lodge No 3684. His contribution to the Province was recognised with his being made Provincial Senior Grand Warden.  He also joined Arrow Lodge No 2240 and Bagshot Lodge No 4804.

He was the founding secretary of the OW Lodge from 1909 to 1919 (with the exception of his year in the chair). Never having been much of a lodge for oration (see Bye Law 6), it is telling that during the early years only two speeches are recorded in the Minutes – that of the Grand Master, and the vote of thanks to Purnell, noting “his unfailing tact, energy, and kindliness” a requirement of Lodge Secretaries through the ages. He was also a governor of the Royal Masonic School for Boys.

His year as Deputy Master was extraordinary in many ways, with his installation setting the tone: It was attended by Sir Edward Letchworth, an Honorary Member of the Lodge and the Grand Secretary, and the Grand Director of Ceremonies. The reason for this deputation was the raising of HH Prince Maurice of Battenberg, for which purpose the Grand Secretary took the chair, and the GDC took the office of Senior Deacon.

The minutes include a report from the Standing Committee at the end of the Purnell’s year, the busiest year in our history: the Lodge had witnessed eight meetings including 3 emergency meetings,  seven initiations, seven passings, and six raisings. At the close of the year there were 89 members, and the Lodge had joined Public Schools Charity Union.

As a footnote Purnell appointed his son and fellow Founder as a steward.  Much to the confusion of would be lodge historians. he was also called Edward Kelly Purnell. The younger had joined his father’s house at Wellington, and was tragically killed in an accident only two weeks after his father passed away.

The Purnell Gift was founded in 1936 in his memory by his son W . J . G. Purnell to assist sons of O.W.s to continue a medical (or other) education at University.