Members’ Jewels under the English Constitution*

A number of lodges have unique members’ jewels that can be worn by suitably qualified brethren. These are broadly divided into 3 categories: Royal Jewels, Grand Master’s Jewels and Special Jewels. 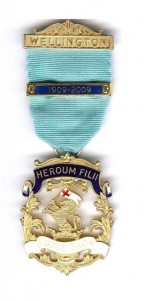 Three lodges have ‘Royal’ jewels or medals[1], so named in honour of those that bestowed them upon their lodges: The Lodge of Antiquity No 2, Royal Alpha Lodge No 16, and the Prince of Wales’s Lodge No 259.

The second category comprises those bestowed by various Grand Masters over the years. Grand Masters’ jewels have been awarded to those lodges closely associated with men that have been or become Grand Master. The OW Lodge’s Connaught Jewel is believed to be one of only six.

Aldershot Army & Navy Lodge No 1971 has a jewel granted by the Duke of Connaught to mark his 44 years as Perpetual Worshipful Master.

The Irish Rifles Lodge No 2312 has a Master Mason’s jewel to commemorate the Duke of Connaught’s role as the founding WM, an office he would hold for 53 years.

Unlike the OW Lodge only Master Masons are permitted to wear these jewels, but like the OW Connaught Jewel they may wear it at any and all Masonic occasions.

This honour is shared by the brethren of our Mother Lodge, Household Brigade Lodge No 2614, who have a members jewel, also from the Duke of Connaught who was their permanent Master, and who are similarly entitled to wear it on all masonic occasions.

Mention here should be made of the jewel worn by members of the OW Lodge’s illustrious grandmother lodge, Jerusalem Lodge No 197. The Prince of Wales (later Edward VII) granted that lodge a ‘distinctive’ jewel, also to be worn on all Masonic occasions, in 1874 when he became Grand Master. This could therefore be both a Royal and Grand Master’s jewel, but by his own request is known as a ‘distinctive’ jewel and who are we to argue.

Royal Somerset House & Inverness Lodge No IV and Grand Master’s Lodge No 1 have their own unique jewels as well.

The last, and largest category members’ jewels are Special Jewels. These belong predominantly to lodges with a strong founding link to an institution or another country, which is often the creative source for the design. With the anchor that forms the centrepiece its jewel, Navy Lodge No 2613 is a good example of the former, whilst Der Pilger Lodge No 238 (Pilgrim Lodge) offers an excellent example of the latter, having a jewel design common among German lodges but not seen in the UK, entirely appropriate for the only English Lodge to work in German.

There are a small number of older (typically 18th century) lodges that have special pattern centenary (and bi-centenary) jewels that date from before the standardisation of the current pattern, and whilst they are not technically members’ jewels, they in effect serve both as centenary and members’ jewels.

The total number of lodges with members’ jewels is not thought to exceed 70, whilst approximately 50 lodges are thought to have special pattern centenary jewels.

There are of course a great many wonderful founders, past masters, charity and other jewels in masonry.

The Library and Museum of Freemasonry

Jewels of the Craft

*E&OE: the contents of this page are the subject of ongoing research. Please do not hesitate to contact the webmaster if there is an error or ommission.

[1] According to Lanes Masonic Records. GM No 1 and RSH&I No IV are classed as Special Medals, rather than Royal Medals.