It is normal practice when either the Grand Master or a Prince of the Royal Blood is the ruling master of a lodge to appoint a Worshipful Deputy Master.  Both these conditions applied to the Old Wellingtonian Lodge at its foundation as the Grand Master HRH The Duke of Connaught & Strathearn KG had graciously accepted the office of Worshipful Master.

Col William Dalgety was an officer in the York & Lancaster Regiment, having joined its precursor the 65th Foot (the 2nd Yorkshire North Riding Battalion) in 1867 as an Ensign by purchase, and seen action in South Africa and notably in the Soudan at the battles of El-Teb in 1884 where he was ‘slightly’ wounded, and again at Tamai, where he was ‘severely’ wounded, leading from the front and, according to General Graham, showing the “utmost gallantry” and rallying his men in the midst of desperate hand-to-hand fighting. Coincidentally, the Grand Master and Lord Methuen, both future fellow lodge members, were also present at El Teb.

For the record, and translating the chronic understatement typical of the time, ‘slightly’ wounded meant a bullet wound to the side and a spear thrust to the head. Severely wounded meant “two terrific sword cuts to the left hand” which resulted in the loss of the use of the arm, and a pension of £200. In today’s terms that is approximately £12,000 (as calculated by the National Archives Currency Converter), rather a poor return for a limb.[1]

Dalgety recovered from his wounds and went on to command the 2nd Battalion in 1888, and on  2 October 1888 received new regimental colours from the Duke of Cornwall & York (later George V), whilst stationed in Trinidad. He was made an officer of the Order of the Bath for his services in 1893. The regiment he served took its name not from the cities or counties in its title, but from the Duchies of York and Lancaster from whose lands it had traditional drawn its men, in South Yorkshire.

Dalgety was the first pupil to arrive at Wellington when the first term started on 20 January 1859[2], having previously been at Aldenham. He joined the Beresford & Blucher, a joint house in those early days. He was in the XV, earning a cap, and was made Head of College in 1862, so his selection as the first Worshipful Deputy Master had fine historical resonance.

He went on to Merton College Oxford, taking his degree in 1867, before joining the Army.

Dalgety had been initiated into Lodge Chota Nagpore No 1352 in Bengal, and at the consecration was a subscribing member of Easterford Lodge No 2342, Grafton Lodge No 2347, and a past master of Natalia Lodge No 1665, a lodge in Pietermaritzburg, Natal, in what is today South Africa. 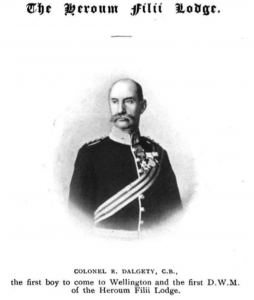