Wellingtonians sport some fairly distinctive colours in unusual orientation when made into a tie.

The colours were adopted from the Crimean medal (shown below, courtesy of the National Army Museum), with its pale blue and yellow ribbon. These colours are most closely associated today with cricket: the XI and the Occasionals.

Their selection was a matter of much debate and quite some frustration. The more predictable colour choice of red and navy blue was rejected as any variation would inevitably infringe upon the  Household Brigade and several other regiments and corps. The colours went through several more variations, with orange replacing yellow and some minor frustrations when a suburban rugby club of limited success adopted the XV’s black and gold stripes before today’s recognisable yellow, orange and pale blue on a black field were finally settled and accepted. It still however takes a bold individual to have these made up into a suit…

Despite these inauspicious beginnings the colours have established themselves in the boys’ and now girls’ affections. This is perhaps best illustrated by Jack Girling’s poem from the Western Front in 1916:

It hangs before me on a nail,

for when I gaze on you from above,

And in the mud and drifting rain,

In fancy play the game I love. 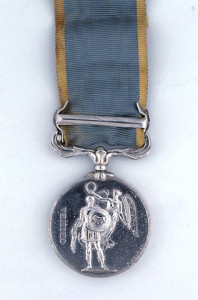